All reviews written by Terry Grimwood and will remain on the site for one year. Please feel free to quote or cut and paste. 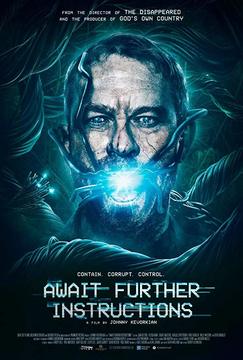 A story birthed in that strange borderland between science fiction and horror, Await Further Instructions terrifies on a number of levels; as a straightforward chiller/thriller, a camera on the dynamics of a fractured British family, a discussion on the dilemma of obedience to authority and finally as a parable on our reliance on, and reverence of, information technology and the media.

​The premise is neat and simple. The Milgram family have gathered for Christmas. There are brutal father-son tensions, heightened by the fact that the youngest link in this chain of generational antagonism has arrived with a British-Asian girlfriend on his arm. A storm is already brewing. This isn’t going to the Milgram’s most enjoyable Yuletide

Then on Christmas morning the family finds themselves sealed into their house. Every window and door are blocked off. It’s all right, however, because just as panic levels rise, the television displays a simple written message; “Await Further Instructions”. The family are not so much thrown, as crushed together within the confines of their modest three-up, two-down. The fault lines, already apparent begin to widen and stifling British reserve, that inability to voice true feelings, breaks down. Traits are exaggerated, violence bubbles towards the surface.

This disintegration is handled efficiently and convincingly, especially the way in which long-established authority-subject relationships can override common sense and pressurise even the most rebellious individual to acquiesce to the most unreasonable demands.

One of the films; most interesting dilemmas is the choice between obedience to, and disregard of, the increasingly frightening messages that appear on the family television. For some obedience brings comfort, structure and hope. The messages, no matter how unreasonable, provide a safe haven bounded by the illusion that the Authorities are coming. An implicit trust in those above us is the only way to survive. Others, distrust the instructions, seeing them as part of the threat and, as a consequence, are, themselves, seen as a danger, to be contained and forced into obedience, even through violence. For me, Await Further Instructions is a microcosm of contemporary Britain in the way I found Stephen King’s novel, Under the Dome, a sledgehammer (but excellent) parody of George W Bush’s America.

As a sf/horror film, Await Further Instructions is tight, concise well-paced and focused. Almost all the action takes place inside a generic, detached British house on a generic estate of identical houses. You see nothing of the other inhabitants of the estate and that alone is significant, haven’t the British, for more than half century, made a virtue made of “keeping ourselves to ourselves”? The monster itself is unique and ambiguous. It is there, in front of our eyes, yet its true nature is left for the viewer to fathom. The film did not attempt to explain itself. The threat exists. It wasn’t and did not need to be explained. I like that very much indeed.

Tense, intense, claustrophobic, original, character-driven and compelling. I highly recommend Await Further Instructions. See it when and wherever you can.