Reviews 3
Echoes From An Expired Earth by Allen Ashley
Greenbeard by John Travis
God Bomb! by Kit power
The Quarantined City by James Everington
Back to Review Page 1
Back to Review page 2
Film Reviews 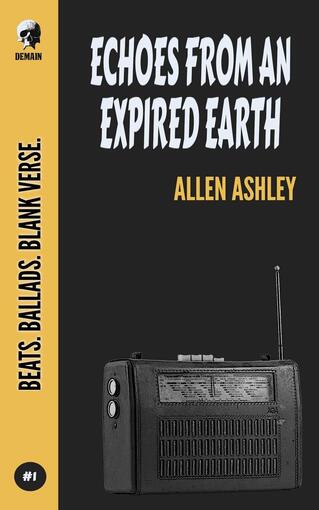 ​ECHOES FROM AN EXPIRED EARTH by Allen Ashley

Echoes From An Expired Earth is a beautifully presented collection of poetic wit, wisdom and just plain fun from author and editor Allen Ashley. A broad range subjects are examined within its pages with a keen poetic eye and take the reader from the wise words of a father to visions of the far future.

The minimalist feel of the poetry in these pages belies the complexity at its heart. The author makes it look simple, but as you navigate the twists and turns of each piece it is apparent that each word, each punctuation point, is so carefully selected, it slides easily into the structure as if created purely for that particular task.

Having said that, please don’t think that this collection is any way pretentious or exclusive or that it conforms to the stereotype of inaccessible literature held by many who are wary of poetry. Echoes From An Expired Earth is an ideal starting point for anyone interested in turning off the literary mainstream into the side lanes of poetry, but is unsure where to begin. The works in here are non-threatening, by turns funny, satirical, poignant, menacing and downright clever. The subjects are recognisable to most of us; a memory of the Tarzan tv series many of us watched us children, an epic pub crawl to almost every pub you've ever visited, and a long, tiring night journey, which can be performed to a backing of Kraftwerk’s “Autobahn” (I saw this performed to an acoustic – yes acoustic - version of the song).

Among the weighty matters discussed are what Sleeping Beauty really thought of the prince who woke her, the past, present and future nature of warfare, a recipe for a monster cake and how the futuristic future we imagined when we were kids, compares with the reality of the 21st Century. Echoes From An Expired Earth is a rich buffet and can be taken in one bite or dipped into so that each poem is savoured to the full, which is how I approached the book. Even so, I still finished it far too quickly, but like a piece of music I enjoy, I will return to it again and again.

My own favourite, a tough one, but if pushed, would have to be Ten Things We’re Going To Have To Live Without After The Apocalypse. I'll leave it there, because the title speaks for itself. If you love poetry, you’ll love this book. If you’ve never tried it, you’ll also loved this book. 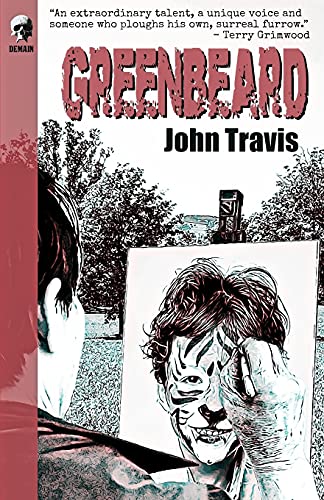 There’s a serial killer on the loose, terrorising a typical English town. The police have drawn a blank. No child, it seems, is safe. There are suspects, particularly the elderly face painter who seems to have appeared out of nowhere. He’s a kindly old chap, but that doesn’t mean a thing because he is different. Daniel is a young lad who stumbles on a terrible secret but can’t tell a soul, because doing so put the lives of those he loves most in mortal danger. Meanwhile the killings go on.

Greenbeard by John Travis is a tightly plotted, multi-viewpoint novella that hides the horrific behind the bland veneer of British family life. It is a world where no one wants to make a fuss, people like to keep themselves to themselves and no one wants to believe anything that might cause them to glance at the disturbing scenery on the far side of their narrow world view.

And no one listens to children, of course, because children are disruptive and are likely to, God forbid, make a scene. But let the slightest suspicion falls on some hapless individual, and the mob monster that lives in all of us will immediately rise from its slumber.

The monster of the story is signposted almost from their first entrance, and yet it doesn’t matter. This isn’t a twisty-turny whodunnit, or even a whydunnit laden with tangled skeins of psychobabble back-story. No, there is a person who needs to kill. There is a child, Daniel, who knows who the killer is and there is a man who realises that he has a way of putting the mark of Cain on the guilty party.

The writing is sharp and economical. Emotions such as fear, heartbreak and anger are skilfully woven into the story’s fabric by a writer who knows exactly what he is doing and when to stop. There is no wasted prose, no padding. The story is a snapshot of now, of what is happening in these people’s lives at this moment and that is what is important. Greenbeard is also sprinkled, lightly but effectively, with a little dark magic. Just enough to give it the trademark Travis strangeness, but not so much it weakens the structure of a very solid character play. Magic realism, I suppose you could call it.

And that ending, it reminded me of the denouement of one of my favourite films, the US version of The Pledge starring Jack Nicholson. 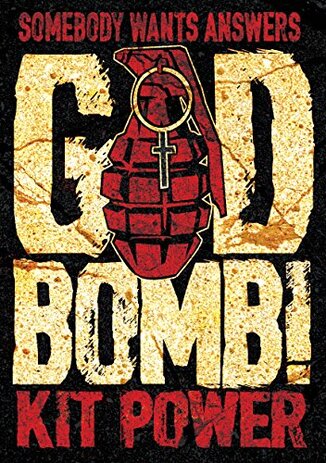 As turn-of-the-screw stories go this is both unique in premise and brutally tense. A young man interrupts an evangelical church service and threatens to blow the place up along with everyone within it unless God speaks to him. In a moment, a disparate group of people are wrenched from a few hours of peaceful, perhaps a little self-satisfied, worship into a living hell overseen by one of the most unstable and unpredictable “villains” I have so far encountered in literature or on film.

The story never lags, the pace never flags, and the tension never ever lets up. From the opening scene to the last moments, the reader is never sure how this is going to end. Kit Power grabs your attention and holds it.

You see the drama through the eyes of various congregation members. The key players are introduced one by one and their inner lives and circumstances are unveiled. They are hardly as pure as the driven snow themselves. Many are encumbered by their past sins and are in that place to seek redemption. Instead they find terror.

The will-they-won’t-they moments are skilfully staged, individuals who seen a slender opportunity to save themselves and the congregation, willing themselves to act while the reader screams at them to get on with it.

The movie Dog Day Afternoon hovered around my consciousness like a filmic ear worm, while I was reading this book. There are a lot of differences between the two, of course, particularly with respect to both the hostages and audiences’ attitude to the hostage-takers. Whereas in the film, Al Pacino’s performance, works a Stockholm Syndrome effect on both his prisoners and his watchers, there was little to empathise with in the God Bomb! gunman. The point at which the two meet is in the stretching of time, the way every eternal second passes and in the levels of stress endured by the human beings who have found themselves at the mercy of volatile, self-obsessed characters on the hair-trigger edge of breakdown.

As unpredictable as its central character, God Bomb! is a masterclass in edge-of-the-seat suspense. Original, terrifying and beautifully written, it is a supremely intelligent thriller. Highly recommended. 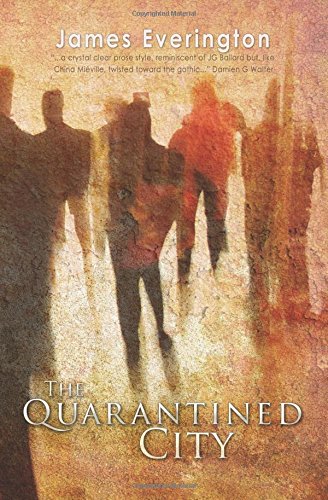 THE QUARANTINED CITY by James Everington

His name is Fellows and he lives in an unnamed, quarantined city. It is a city closed off to the outside world. A city in lockdown. How contemporary and relevant is that! Except that this novel was written years before anyone had ever heard of covid-19. The reason for this particular quarantine is unclear, but the citizens seem accepting enough. There is a protest movement and there are grumbles of discontent, but all-in-all people do not question what is happening to them or seek to change it.

Fellows, however, is growing uneasy and confused. His house is haunted. The city around him seems to be in a constant, though subtle state of change, disturbingly unnoticed by anyone else. He is tormented by fragmented memories. No one is who he had believed them to be, including himself, and he has become obsessed by the fiction of an enigmatic and reclusive author.

The Quarantined City by James Everington is an intriguing, bewildering, sometimes infuriating but always rewarding novel. Comparisons have been made to J G Ballard and I think them valid. There is a deceptive simplicity in the writing style that reminded me of Ballard, and also of his stablemate, Brian Aldiss. I was also caught a scent of D F Lewis. The story’s milieu is similar to the oddly very-British landscapes of Lewis’s fiction. Not only Britishness, but thge outdated, over-polite, slightly-bemused-by-the-world version I remember from my childhood. There is a Lewisian, dreamlike quality to the story and its presentation. A relatively peaceful, though enclosed world where there appears to be little that can harm the protagonist, but which is shot through with a gathering, but hard-to-define menace. Added to that, there are John Travis-style absurdities mixed in with Kafkaesque puzzles and sudden, destabilising shifts.

Many comparisons but, in the end, The Quarantined City is absolutely the child of its author and a highly original one at that. The dislocating sense of being shut-in, of a world that has come to a halt is something which all of us have experienced during the covid-19 lockdown and it is that experience that intensified my relationship with this novel. The Quarantined City is a delight. It keeps the reader guessing and unsettled. Fellows is an engaging protagonist, although, at times, one you feel needs a good talking to. He stumbles through the story in an appealing state of bewilderment which transforms slowly into grief as memories from what seems to be another world begin to break through.

​My advice? Take a trip through The Quarantined City, sit by the fountain, enjoy the sea air and allow yourself to become lost in its familiar-then-unfamiliar streets. It will be a weekend city break you will never forget.

THE QUARANTINED CITY by James Everington
Buy it HERE